I went back to uni for a semester. After one unit into a sixteen unit coursework Masters degree, I'm cutting my losses.

but it turns out that:

It's good that it:

Classmates:
So I'm almost definitely going to be a uni dropout now!
Posted by Jason P at 17:28 No comments:

I had a Tastea Matcha Latte with Red Beans in Box Hill with an old friend. It didn't have much matcha taste. This is a reminder to myself to try somewhere else next time!
Posted by Jason P at 15:11 No comments:

I went to a meet the author event at ANU with my friend Daniel. Hugh Mackay, who had written Australia Reimagined, started trotting off all the reasons why things are bad in this country.

Things like:
He claims that we are not living as though we need each other.
There's also the idea that compassion is a cool mental decision to treat people kindly and with respect.
One remark that I totally agree with:
The state of the nation depends on us as we can't and won't look to political leaders.
After all, they're the ones often conducting themselves poorly and manufacturing fear. Even with the idea that middle class Australia is doing it tough - we have the ability to change our spending after all.

He mentioned something about this town:
https://www.theguardian.com/commentisfree/2018/feb/21/town-cure-illness-community-frome-somerset-isolation

Apparently the things that older people criticise young people for are what will equip them for the uncertain future ahead.

He predicts a return to mutual societies, credit unions and the like, and away from repulsive commericialism. Like what happened when AMP converted from a mutual society.
Part of it was also getting away from institutions that have failed the people. He claims there is an increase in house churches in Australia, in the same style as there are in China.

Interestingly, he says there was frequency analysis done on literature from way back to the century just past and there's a lot more occurrences of I than we nowadays.
Posted by Jason P at 00:04 No comments:

Tuesday started off with a sweet Bike24 delivery that had to be signed for.  I went to work and had another packet of pea and garlic snacks that were provide by a colleague. I went into a different part of the office to do some unboxing of new widgets and came back to my usual desk at around 11:30. I think that's when I started feeling it.
First it was a dull headache, fever (why is my face so hot?) and then chills. It was weird to be sitting in a meeting room feeling cold but when I'm normally overheating. A colleague came to visit me in the later afternoon and only after they accused me of having an afternoon nap, I decided to call it. By the time I was ready to go, the headache had gotten a lot worse - like my brain trying to escape the confines of my skull. Extra information: I took a really large dump in the morning.
After getting home, I tried napping it out. I still felt terrible so I asked for the advice of my pharmacist sibling. She basically told me to HTFU but did deliver some supplies. This form of existence was truly terrible. Headache, fever, muscle aches. I had no will to move - not even to amuse myself with my phone.
Most of Wednesday was much the same. Every time I missed a dose of paracetamol, I did notice my body temperature shot straight back up. I tried having some oats and bread. After the second go at having oats, I confirmed that I was indeed lactose intolerant for the duration of the bug. What a horrible existence it is to be drinking water and turning it into shit.
However, by Wednesday night things started to look up. I was able to move around without using all of my willpower. Still, I didn't get that much sleep.

Virus
Not a recommended experience. 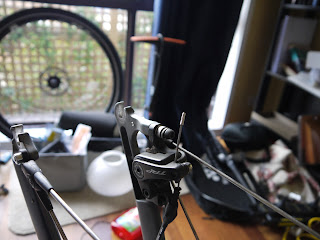 After some overzealous brake alignment efforts, the post-mount thread became stripped and the bolt retained only with Loctite. I baulked at the cost of a replacement fork so I ordered M6 thread insert repair gear. 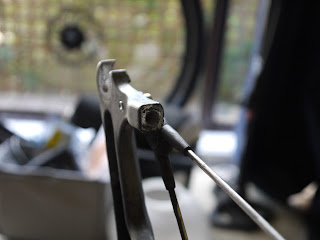 Yeah, that thread is gone. I used the drill and vacuumed out the old stuff. 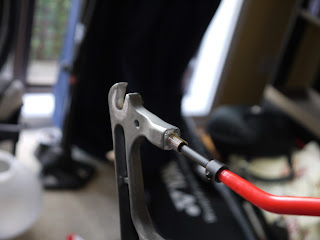 Inserting the new thread. I bought longer ones as I feared the ones in the kit would be too short. 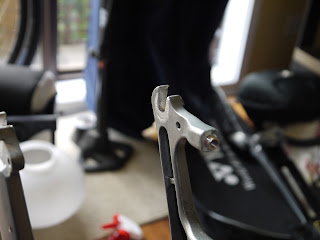 Oh dear. The tool gets stuck and there's thread left over. I cut it off with cable cutters. 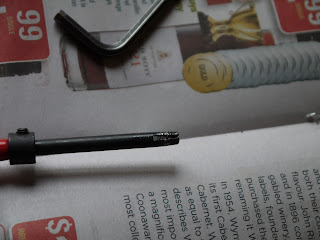 Otherwise it seems to be a solid repair at around $15 (with my own labour but less wastage) instead of $100.
Posted by Jason P at 22:29 No comments:

I think mine is mostly due to the locknuts coming loose on the rear wheel. Doing them up seems to avoid noise for the next few months and alignment is achieved with the rotor and callipers.
Posted by Jason P at 10:59 No comments:
Older Posts Home
Subscribe to: Posts (Atom)